IKEA West Chester, located 30 miles outside Cincinnati, Ohio, USA, has been using the Leanpath food waste prevention platform in its restaurant and bistro for a little over a year. The store measured an initial annualized food waste weight of 14,000 kilograms. By setting goals and keeping the team focused and trained, the store cut its food waste by 20 percent in one year. That translates to nearly 5,000 meals saved from the bin.

“As the leader of a department, you have more data through Leanpath [than with manual tracking], and you didn't have to spend time putting it together,” says Admir Pavlovic, food operations manager at IKEA West Chester. “Leanpath helps you run your business better." 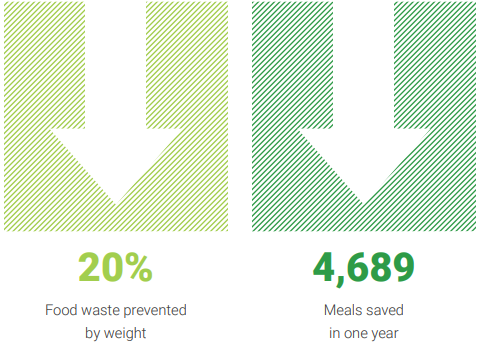 IKEA West Chester’s work is part of the company’s Food is Precious campaign, launched in 2017, with the goal of cutting food waste 50 percent by 2020 in its restaurants, bistros and Swedish Food Markets. Annually, over 660 million guests enjoy IKEA food in more than 400 stores in 49 markets. The company will reduce its environmental impact by reducing food waste, but also inspire change in others. Leanpath is proud to partner with IKEA since 2015, helping the company achieve this ambitious and important goal. As of February 2018, Leanpath, one of IKEA's two food waste partners, had helped the company prevent the equivalent of 2 million meals from being wasted.

West Chester has found success setting food waste goals and rally coworkers around them. The team set a goal to reduce cinnamon bun six packs by 30 percent in four weeks and ended up reducing the waste by 74 percent by cooking smaller batches. Now instead of trays of 15 cinnamon buns, the bistro does 6 to 8, no longer cooking large batches that just get thrown out.

The team also reduced pizza waste by only cooking slices to order—as opposed to whole pies—for the first hour and last hour of operation. They found it important to adjust cooking times for slices. Also, they had to develop a technique for cutting the frozen pizza into equal-sized portions: since it's difficult to cut through a hard, frozen pizza, they found they could make a shallow cut, then snap the pizza along the cut line. Perfectly portioned slices. They’ve also introduced cook to order for pasta, sauces, chicken tenders and fries.

Food Operation Manager Admir Pavlovic understands as well as anyone: there is no extra time in a kitchen. “But you have to take the time to train co-workers. Training is the most important thing if you want them engaged." The other key: sharing the food waste prevention success. Goals are posted throughout the kitchen and food waste data is regularly reviewed with co-workers. “They get a lot of insight into what the waste means. They’re not just dumping it.”