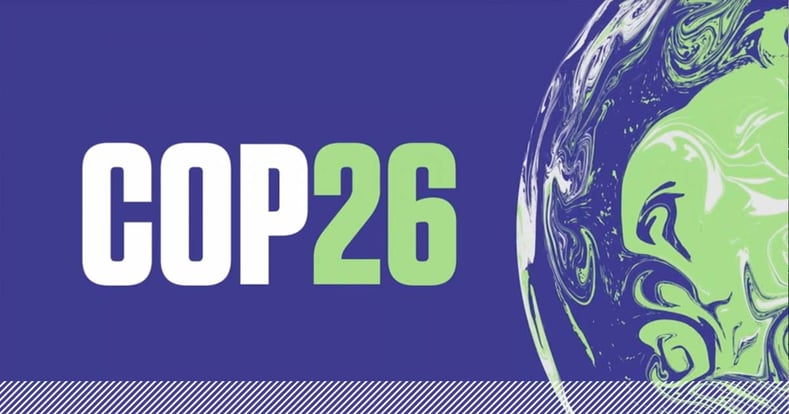 It’s been an exciting, and pivotal, couple of weeks as world leaders, policymakers, business leaders, and concerned citizens gathered in Glasgow for COP26 – the Conference of the Parties to focus global efforts on emissions reduction. And while we prepare to analyze the final outcomes of the sessions, the need to sharply reduce emissions across all meaningful contributing sectors is beyond question.

Beyond the physical signals that so much of the world is experiencing (including droughts, fires, hurricanes and floods), the most recent IPCC report noted that it is “unequivocal” that human influence has warmed our atmosphere, ocean, and land – and that global surface temperature has increased at a faster rate since 1970 than in any 50-year period over the last 2000 years. The report also warns that every increment of global warming exacerbates climate effects, and that many changes from past and present future emissions are “irreversible” for centuries or millennia.

Further, the World Meteorological Organization’s (WMO) recent State of the Global Climate report noted that the last six years have been the six warmest on record. The WMO warned that there is a 40% chance that the average annual global temperature could temporarily reach the bellwether 1.5°C mark at some point in the next five years.

There is no question that businesses and governments must step up with transformational commitments backed by clear actions. On the plus side, we’ve seen a wave of emissions-reduction commitments from global business, and it is increasingly clear that the Finance sector is committed to driving decarbonization.

And yet there has been concern voiced that food and food waste did not have a prominent place at the current COP table. While disappointing, food system advocates should stay positive for several reasons.

Second, roughly 30-40% of annual food production is lost or wasted – as much as 2.5 billion tonnes according to a recent WWF report, accounting for about ten percent of global greenhouse gas emissions. Significantly, the Food and Agriculture Organization noted in 2013 that if ranked as a country, food waste would be the third largest emitter of greenhouse gas emissions behind the US and China. And more recently, the Project Drawdown team cited food waste reduction as one of the top solutions to addressing climate change. It’s clear that reducing food waste is an essential tool for emissions reduction.

Third, the food system has (correctly) received enormous global focus in 2021 to date, driven by a steady stream of key reports and global dialogues leading to the UN Food Systems Pre-Summit (July) and the landmark UN Food Systems Summit in September, as the world becomes increasingly aware of 1) the urgency needed to address climate change and the Sustainable Development Goals (SDGs) and 2) the central and critical nature of the food system to drive those efforts. We are in the Decade of Action, with just over eight years remaining to meet the SDGs, and we are well off track. Rebuilding a sustainable, regenerative, and equitable food system is essential to accelerating progress toward the SDGs, including tightly-linked climate challenges related to deforestation and preserving the health of oceans. Food system transformation (including food waste reduction) will remain a climate imperative.

Last, it’s important to note that recognition of the importance of food system transformation wasn’t entirely absent from the broader COP26 conversation. Notably, when asked about whether (food) waste and resource efficiency (i.e. circular economy) topics were receiving sufficient attention at the Conference, WRAP’s Richard Swannell noted that he was struck by the fact that these topics were “everywhere” in the side events – and that participants were appropriately questioning how the world could meet the 1.5°C goal without focusing on the food system. He added that elements of food system transformation were already evident in the announcement on deforestation and the methane commitment.

The critical linkage between the food system and global emissions was also covered in a session at COP hosted by the Pacific Coast Collaborative (PCC) entitled Models for Implementing 50% by 2030: Partnerships to Reduce Wasted Food on the North American West Coast. The PCC is a regional collaboration (including British Columbia, Washington, Oregon, California, and six major Western North American cities) focused on reducing greenhouse gas emissions while accelerating a low-carbon region by transforming energy systems, buildings, transportation, and food waste management.

In this session, all of the participants built on the connection theme between the food system and climate. Oregon Governor Kate Brown referred to many painful signals of the growing impact of climate change in her state (a crippling ice storm, a heat dome event, and wildfires). Jennifer Hennessey, Senior Policy Advisor from the state of Washington, commented that food waste is the largest component of solid waste in Washington’s landfills, adding that more needs to be done to prevent food from going to waste and to reduce emissions through downstream efforts (such as donation and composting) that reflect a focus on proper valuation of food resources.

Further, Shereen D’Souza, California’s Deputy Secretary for Climate Policy, noted that California is addressing the severity of short-lived climate pollutants (such as methane) through landmark legislation (Senate Bill 1383) which mandates a 75% reduction of food waste to landfill by 2025 along with recovery of 20% of edible food that is currently disposed for human consumption. Marcene Mitchell, Senior VP of Climate Change at WWF, cited the “enormous impact” of food waste on nature and climate. Last, Richard Swannell added that the world requires a land area the size of China to grow the food that we throw away annually. And in another side session on Food Production & Nature-based solutions, Swannell pointed directly to the linkage between food waste and climate change, referencing WRAP’s recent messaging that food waste feeds climate change.

In short, food waste and food system issues may not have been front and center at COP26, but they will be an essential part of the global emissions reduction movement–they are too big not to be.