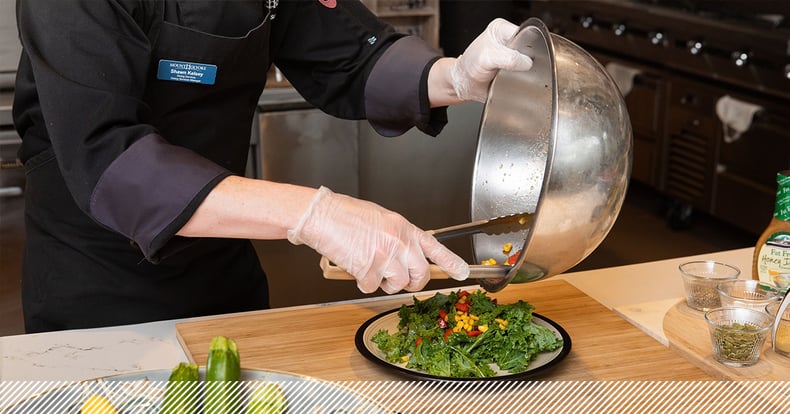 Mount Holyoke College started tracking food waste with Leanpath in October of 2019. And then, well, the world changed.

For the safety of the community the majority of the students were asked to leave in the spring. The college reopened in August with only 150 students on campus. The private women’s college in Massachusetts, USA, typically has a student body of 2,200.

“But the college wanted to make sure those students got a great dining program, and they also wanted to keep as many of our foodservice staff employed as possible,” explains Dining Services Manager Shawn Kelsey. “We opened half of our food stations and made sure we had a lot of offerings. The students got a great experience, but we knew food waste and diversion was going to be an immense challenge.”

The kitchen utilized the Leanpath tracking system to its full potential by reviewing food waste reports, sharing that data with the staff and quickly incorporating innovative ideas to prevent the waste going forward.

As we all adjusted to the challenges of 2020, something notable rose to the surface in foodservice: measuring food waste was no longer just a way to cut costs and be more efficient, it became a key tool for learning and adapting to the new normal. What a kitchen wasted was one of the few real-time data points it could use to understand what was working and what was not as volumes dropped and service styles changed dramatically.

Since Mount Holyoke reopened in August, it has reduced its food waste 49%  by weight and 60% by value.

At the end of the first week of service after reopening, the management team reviewed their food waste data.

“We were able to pinpoint immediately that overproduction was much higher at the grill station and the kosher station. Way above what we had at the other stations.”

They quickly switched from a full menu of pre-prepped items at the grill station to cook-to-order service. This cut the station's overproduction immediately, and the freshness of cook-to-order was more appealing to diners.

The kosher station was more complicated.

Pre-COVID, diners would go to any station they liked with no restrictions on movement and dine-in service only. That stopped with the pandemic: now, students enter in one door and walk in a straight line past each station and exit at the end with take out only. The kosher station, it turns out, was at the end of the line.

“By the time students got there, they already had two full to-go boxes,” says Shawn.

Again, the data was shared with the management team, who decided to try something unique. They shared kosher recipes they were considering adding to the station with students via a QR code. Students gave feedback, and through this “test kitchen” staff gauged what would be popular at the station, and it gave the students a reason to wait until the last station to get served.

“You cannot effectively reduce food waste until you know how much food waste you have in the first place,” says Shawn. “Weighing your waste stream not only gives you a baseline for improvement but it also tells you the what, where, and when about your food waste.”

The waste at the grill station has since dropped by a weekly average of 54%. The kosher station has done even better, dropping by 78%.

With those two large food waste sources under control, the kitchen has leaned into other opportunities to reign in waste.

Two of its largest waste items were white rice and vegetable trim.

“We got a lot better at making smaller batches of rice that matched demand better,” explains Chef Manager Tom Ritter. “We also got better at letting staff know that if they ran out of rice close to the end of a meal period it wasn’t the end of the world. We’d rather see that than see more waste. With the amount of variety being offered, one less starch did not greatly impact our offerings.”

They’re getting even more food waste prevention out of the wok station, repurposing overproduced scrambled eggs and julienned broccoli stems that would have been trim waste.

“I knew we were wasting a lot of fruit pulp because I knew how heavy it was when we’d take it to the compost,” says Culinary Assistant Trish Braman, who at times runs the juice bar. “But it wasn’t until we started tracking it with Leanpath that I realized how much it cost.”

The flexibility at the wok and juice stations is being encouraged throughout the kitchen. All overproduction from prep and the line goes into a specific walk in. Before service the culinary team surveys the extras and creatively incorporates them into each meal service as culinary specials.

“All the stations go in there and use their imagination,” says Production Manager Dennis Saletnik. “‘We have turkey leftover one day? Let’s make pot pies the next day.’ And this is not just one person, but the whole team comes up with great ideas.”

Importantly, that overproduction is noted in the kitchen’s production system, so adjustments can be made to produce less of those items when they show up again on the line.

Shawn says team engagement has been critical because “their decisions every single day will determine the success of the program.” Sharing successes and challenges as well as opportunities to be creative with repurposing keep food waste top of mind. And paramount, he says, is to “make sure the system is presented to the team as a non-penalty system. If people are ultimately punished for tracking their food waste all you will end up with is a heavy trash can.”